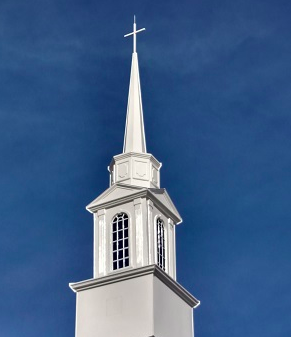 On Sunday I watched a horror movie – in church.

It was like being in an alternate universe, one that ends with a gun and victims. As a writer/director, I watched it all unfold like a film, taking in every movement and reaction, ready to run for the door at any moment.

Need to preface the rest of the story by saying, we don’t belong to this church, we’ve bounced around a lot since we moved south, but we like it and attend occasionally because the priest, who’s an older man, is just a cool guy. He teaches messages of love.

To set the scene, the building has a horseshoe shaped seating arrangement, with the alter in the middle. Estimate there were about 200 people in attendance.  We sat to the right of the center aisle, the second to last row. Having that gap in the middle gave me a clear view to the front rows on the left side. An obviously troubled young man took the front, center seat, on that side.  He was alone in the row, and had several items on the seat next to him, including what looked like a red and white cylinder bag, like an athlete might have.  The front row has no kneeler, the seat is open to the alter area. The lectern’s also on that side, where the readers and the priest address the congregation.  He was about eight feet from them, alter boys included, during the reading of the gospel.

Would have been hard not to be conscious of the way he was dressed. He had on a camo tank top, exposing considerable body hair.  The shirt was big and hung low over his black baggy, over-sized shorts.  His shoes were bulky black combat boots, finished off with white crew socks; if intimidating was the look he was going for, he accomplished his goal.  I operate on a firm policy of live-and-let-live, so his clothing meant nothing to me, felt like an odd choice for church, but it was his, not mine.

His actions were all together a different story. From the beginning of mass he put on a show. At the end of the opening song, (which was already strange because no musicians could be there that day so we were singing a capella,) he continued to stand while the rest of us sat down. He held the songbook in one hand and stretched both his arms out to the sides, he remained in that stance for an uncomfortably long time as the mass continued.  His actions got progressively more aberrant as the service went on.

At one point he pulled out his phone as if someone had called, although there was no audible ringtone. He talked at the height of his voice, saying he was in church as he meandered out into the vestibule. Couldn’t help but think he had an automatic weapon stashed in the ample foliage out there, but in what looked to be angelic intervention, as soon as he reached the area, there were several men walking around close to him who hadn’t been there before. He ended his call and came back to his seat.

Although he didn’t know the particulars of the Catholic mass, he made quite a show of praying along. His actions were all larger than life, and for those of us who had a clear view, there was no denying it was all leading up to something.

Two men, seated in the section next to ours, started making a plan with only eye contact and nods. One of them moved over to the subject’s section and took a spot two rows directly behind him. The other moved to the front row of his own section, giving him a straighter shot to be able to get to him. They continued to send each other visual signals, the man behind him softly slapped the side of his leg, the other man nodded. I took that to mean he saw something under the baggy shorts.

There was a level of calm that came with the knowledge these men went into immediate action. They had a law enforcement way about them, and were both substantial in size. Felt like they could’ve subdued him. It took a little of the edge off, but also realized this camo-clad/combat booted man could have been ex-military, who knew how to fight back. There was no doubt it could get ugly before it was all said and done. By this time my stomach muscles felt like a bag of rocks.

At one of the many times we stand during the service, the man walked down the aisle between sections and tried to engage a young woman in the middle of the row about halfway back. Several men stepped to him and told him he needed to return to his seat. He did.

But then came the Lord’s Prayer. Never in my life have I seen anything more bizarre.

During the Our Father, in a Catholic church, the congregation stands, and holds hands. Since the pandemic, that tradition has ended, now people raise their hands in devotion on their own. The young man started out as the rest of us, standing, with his hands held up in respect. But he quickly shifted his stance to Christ on the cross, even trying to balance those hefty combat boots one on top of the other. The top foot slipped off several times and he lost his balance, but he went right back to his tableau and stayed there until the end of the prayer. At that point, people started to quietly leave, especially those with children.

It’s an odd situation to have to assess. Pretty sure most of us thought about leaving, but the priest and the alter boys were continuing with mass and no one wanted to abandon them, or cause more of a problem by punctuating the scene with a mass exodus. There was no doubt in my mind, we were all praying for protection, for everyone involved, including this troubled soul. We were in church, what more perfect place to ask for help; you could literally feel the energy of the prayers, it was intense.

The Kiss of Peace came next and my heart dropped. After the priest offers peace to all, he invites us to share it with each other. Again, with Covid, handshakes are a thing of the past, most people just wave and offer peace signs. The first thing our subject did was take a step toward the priest, put both his arms straight out in front of him and made a shooting guns gesture with both his hands, as he said something to the effect of, and peace be with you.

At that point I searched for our two angels and realized a police officer in a bullet-proof vest was standing at the back of the church. The man who had been behind him was now standing in the back as well, with his two young sons.  He got the boys hidden behind a wall and returned to the seat behind the young man.

It was really hard to concentrate on anything about the mass, the threat was consuming. But I worked to listen to the priest’s homily because we all needed to hear the right words, he didn’t disappoint. He told us evangelization was about actions not words, that treating people with kindness was the way to teach about God.  One of the two lectors sat directly behind him, she was there alone. Throughout his performance she showed him nothing but kindness, smiling and exchanging what looked like kind words. And right before communion she leaned forward, put her hand on his bare shoulder and quietly whispered something to him. It was a fairly long interaction, the whole time with her hand gently resting on him. It was the kindest gesture I may ever have witnessed; you could feel her love. Whatever she said was a turning point. The young man took communion and went one row back so he could pray on his knees. He knelt there and cried.

That’s when the knots that had become my stomach started to ease. The final scene, in what became a story of redemption, played out during the last group prayer.  At the end of mass now, the prayer to St. Michael is recited in unison, (a fairly resent addition, must have been Pope Francis inspired.) Most churches have it printed on the inside cover of the hymnal. This church has screens mounted above on both sides. Having the words spelled out right in front of him turned on the light. At first he was just captivated, reading the screen but saying nothing, but by the end of the prayer he was saying it with us.  St. Michael had the final blow, whatever darkness was driving this poor broken soul was overcome. He defended us all.

After the prayer, as we were leaving, he was surrounded with people shaking his hand and talking to him. It was a heartening scene after all we’d been through. Have to say, we were still really relieved to be out of there. Not being members, we don’t know anyone and haven’t been back yet, so I have no post log, other than seeing the policeman waiting patiently for the people to clear before he approached him.

Horror is a popular genre these days, within the screenwriting community there’re a lot of people pumping it out. Definitely not my jam. For me, there’s too much horror happening for real to want to entertain myself with it too. You can imagine my relief when this real-life movie turned out to be a love story.

All I can say is, thank God.