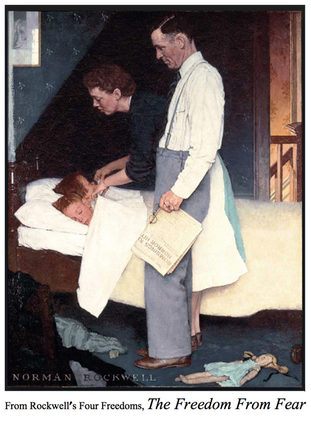 I walk ~ a lot. It’s an obsession. Washes several birds in the same bath; get some exercise, a shot of nature, and private time to contemplate just about everything. There’s a path that takes me past a small nature preserve, then slips me into the hood next door, (there’s only two streets on our side, so I borrow theirs for a daily three-mile jaunt.) Whoever paid to have the path paved is my hero.

The nature preserve is a kaleidoscope of constantly changing color. With all the rain the East has seen this year, at one point the wild flowers and weeds were towering over my head. A farmer came and harvested the field for feed, setting the stage for the fall growth; new hues and heights. It’s all very pretty and peaceful, but the primary backdrop for my walk is the picturesque little neighborhood beyond the pasture. It’s finely trimmed, compact lots, offer city style living in the middle of forever farmland (Amish horse and buggy carts own the roads.) When I say picturesque, I’m not exaggerating, it’s the prettiest little hood. The residents care about their homes and community, it’s obvious. Feels like I’m strolling around my own private sanctuary, canvassed with arbors, play-sets, patios, porch swings and fire pits. And flowers, good Lord, the flowers. The builder obviously offered white picket fencing as an option because it’s a predominate feature throughout. Classic stuff. Large grassy common areas run down the middle of the main road, and in between several of the side streets. The biggest boast a pergola and a gazebo. A haven of middle-class America.

Would not be surprised in the slightest if someone told me the ghost of Norman Rockwell hangs out there. This place is the quintessence of community. Charming and hospitable, it regularly tugs at my heartstrings. In my daily strolls the Rockwell paintings are life-sized and animated. Razors piloted by little kids race down the same street that houses the sisters who jump rope on a different day and older boys who practice their slap shots in the fall, net perched in the middle of the road. This also happens to be the road of the two Charlies. A sister and brother from a litter of adorable, fluff ball puppies, (born on the other side of the neighborhood,) who ended up with the same name, on the same street, three doors away. (Was told they have regular play dates.) There are backyard flockers, sidewalk chalkers, and dog walkers galore. All of them kind and neighborly, (have had my share of chats.) Then there’s the gaggle of teenagers, dressed in Homecoming couture, waiting for the limo to arrive, (early evening is my sweet spot.) Their parents on the periphery, phones put away, high school moment in the books. Have even witnessed a wedding reception, (avoided my normal path so I didn’t intrude,) the big white tent and the beautiful young bride were hard to miss. The groom and his entourage were tossing a Frisbee in the common area. Every evening there’s pleasant interactions, sometimes in person, and sometimes just the artwork of their lives. Rockwell’s Americana, home at its best. The little hood that could, the perfect metaphor for the best in us all.

Home, you might have noticed, is a recurring theme with me. It’s the archetype of what’s safe and good and right. At least it should be, lately it’s become symbols of just the opposite. Our own citizens aren’t safe from those who are supposed to protect us, even in their own homes, being that we’re now a nation in the business of peddling division, hatred and fear, don’t think we fall in the category of good anymore, and when it comes to right and wrong, our compass isn’t only malfunctioning, it’s worthless. Beyond all the talk that tries to normalize dishonesty, beyond the cheating to get ahead in business and politics, beyond exploding the national debt for the sake of greed and control, and beyond the obliteration of healthcare, beyond all that and more, children, the most vulnerable among us, have been separated from their parents and housed in internment camps. Can we stop a moment to fully grasp the significance, we’re talking about appalling abuse of children. The United States, our home, is inflicting crimes against humanity. And why, because that’s the U.S.’s humanitarian way? It’s too hard to take, we’ve allowed ourselves to be dragged down to the basest of behavior through a narrative of bullying, debauchery and lies. Passionate and convincing lies, again and again, and we’ve swallowed the storyline. It’s incredible.

We’re making history with a government encircled by talk of affairs and porn stars, tax evasion and bankruptcy, law suits and death threats, nazism and hate crimes, misinformation and sensationalism; the list goes on and on. Avarice drives legislation, from health care to gun control, money wins. Questionable money. Power hungry politicians care more about their millions, than their countryman. And God help you if you’re a journalist. The cry of "fake news," where reporters are covering documented indiscretions, has one third of our country snowed into believing the reporters are somehow to blame for the deviant behavior; just by reporting it. It boggled-the-mind watching the murder of, Jamal Khashoggi, play out with this administration. They couldn’t have been more transparent in their lack of concern and greed. Oil and wealth, the only goal. Situations you never in your wildest nightmares believe could happen are playing out in front of us.

Never would've thought it possible I'd be embarrassed of our country, I’ve always been proud to be an American. Proud we stood up against oppression and our brave men and woman offered their lives to fight alongside our allies, ensuring our freedoms (my Father was one of those men.) That kind of valor and honesty was once a standard for our leadership. Not anymore. We're lost, how do we find the path home?

Speaking of that, returning from my walk yesterday, (oh, and btw, did I mention it’s a diverse neighborhood? Always a rainbow of kids playing together, the way it should be) anyway, when I got to the path, the wind over the pasture bent the wild flowers and weeds, toppling and twisting them in a dance that made me envy their freedom. They grew, side-by-side, different but the same, bolstering each other from what would take them down if they stood alone. No reason to fear the storms, they’re all in it together. No reason to fear at all.

And now a synagogue bombing in a city close to where I grew up!! It’s overwhelmingly sad. Thanks for your beautiful words.

My sentiments exactly, but I am optimistic we have hit rock bottom and there will be sunshine once again.

Love your optimism and will gladly join you.

I like your bluntness-not surprising. I also especially loved your tying it to paths we choose to take and diversity of plants-weeds flowers to make a beautiful landscape. Quite excellent-more,

Thx, Marion, appreciate the kinds words. Love that we are of like minds. Godspeed in your travels.