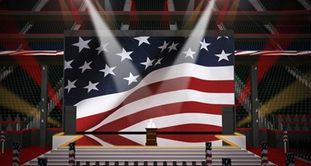 Been throwing this one around for quite a few days now.  Haven’t been sure how to approach it.  But, hey, sometimes you just have to speak your piece.  I’ve developed an unnatural fear of DTs, not delirium tremens, (only occasionally imbibe,) no, my fear is centered around Donald Trumpisms.  Started an “Opinions” tab on my website for political commentary, because this doesn’t seem like the place for that, but some topics are unavoidable.  The presumptive GOP nominee has me scared.

Wondering if we’ve all gone nuts or have slipped into an alternate universe, one where the playground bully, (the character in the movies we root against, the rich kid who eviscerates everyone around him with his acid tongue,) the one devoid of character and compassion, is the one who wins in the end.

I’m confused.  Got a few questions.

Is the GOP actually standing behind a man who has knee-jerk sophomoric reactions to criticism?  A man who pummels those who oppose him with scorching invectives, as a standard practice?  Is disregarding decency and strength of character worth it for the sake of party unity?  Can it even be possible they are throwing their hands up and resigning themselves to DT as their candidate?  Surely Rod Serling has come back from the grave; we are entering The Twilight Zone.

Some interesting news stories have surfaced about DT; represents some real presidential material.  Like his chosen method of telling his second wife he wanted a divorce, taking out an ad in the New York Post.  His biographer, Robert Slater, in an interview with BuzzFeed News, relayed the story, ‘'He put the newspaper down in front of her door that said, ‘Donald is Divorcing Marla.'’  Mr. Slater was told he couldn’t use the story in the book he was writing for DT.  Gee, can’t imagine why not, such a heart-warming little anecdote.

Then there is always the fairy-tale about, Trump Taj Mahal, in Atlantic City.  One of the four bankruptcies DT “negotiated.”  When veteran securities analyst, Marvin Roffman, (who had specialized in the gaming industry since the first casino in Atlantic City opened in 1978,) warned DT the project would fail, give you one guess how he reacted, bingo, threatened to sue him and demanded he be fired, all the while publically deriding him.  Never mind actually listening to the expert, Roffman was saying something he didn’t want to hear, so the only course of action, natch, crush him.  And crush him he did, Roffman lost his job and reputation.  Interestingly, they did eventually end up in court, Roffman won.  More money out the door for the DT, he lost a bundle on that botched business fiasco; along with his yacht and airplane.  But hey, according to DT, filing for bankruptcy is a common business tool.  In his own words at the Sept. 16th CNN Republican debate, “I used the law four times and made a tremendous thing.  I’m in business.  I did a very good job.”  Mr. Roffman might have something to say about that.

Imprudent DT stories aside, the real fear with this man of such dismal character, pack mentality.  DT has assumed the alpha-male role like a duck takes to water; and he’s leading the pack down a dangerous hole.  It’s dark and angry.  Inciting that kind of biting, snarling attitude has proven to be dangerous and it’s only going to get worse the more power he is given.  Case in point, Megyn Kelly.  In her interview with People Magazine, she described the aftermath of DT’s public attacks following the Fox News presidential debate.  He was unhappy with her pointed questions as one of the moderators.  DT made some classy references to her being on her menstrual cycle.  (Absolutely the kind of comments we want a president making, wouldn’t you agree?)  In the article, “I Just Wanted It to Stop”, by Emily Strohm and Charlotte Triggs, Kelly talked about the animosity coming in endless waves.  As a result of his reaction and inflammatory statements against her, the pack was worked into a frenzy.  Kelly acknowledged, ‘“The hate can be very ugly and it can be threatening and it can be off-putting when you're walking around the city with your kids in particular.”’

One thing DT has done better than anyone in this campaign cycle and beyond, he’s elevated the art of the insult.  Taken name-calling to new heights.  What an image for the leader of our country. We’ll all be so proud.  Looked up the science of name-calling, interesting stuff.  One definition, “…a technique to promote propaganda. Propagandists use the name-calling technique to incite fears or arouse positive prejudices with the intent that invoked fear.”  It’s worked for me, only the fear is centered on DT, not the people he criticizes.

My hope, (a fantastic fantasy,) the talks at the White House today with Speaker Ryan were to assure the political players their club is safe, DT is going to take the world stage and make the play of a lifetime.  (Have posed this scenario on my Opinions tab.)  Make the boldest move in the history of politics; at his zenith, DT walks to the podium in an expected acceptance of the nomination and, in that moment of being the epicenter of world attention, anoints the chosen.  His apprentice.  Admits he doesn’t want to be president, (who would,) and assumes the kingmaker instead.  A role he’s much more suited for.  He retains his fame and doesn’t have to pretend he wants to work 24 hours a day being responsible for our country.  The Republican Party, in a wild celebratory whirl of relief, goes all in with the Chosen and all is well that ends well.  (The fervor might even give them what they need to beat Hilary.)

Not a chance he would do such a thing, you say?  I can hope, can’t I.  The alternative is unthinkable.  DT wouldn't make America great again, he'd make us criminals.  A man one step away from the presidency who, lies and childish responses aside, actually said the way to cut the legs out from under ISIS is to go after their families.  He believes we should engage in the same form of terrorism we are trying to free ourselves from.  Disregard the Geneva Convention and willfully kill innocent women and children.  Wonder if all his devoted pack followers would be willing to pull the trigger.

Fear of DT, oh yes.  To use one of his often repeated qualifiers, very, very afraid.

You are absolutely right on the mark in my opinion. It saddens me to see folks supporting this ugly American.

What have we come to that he is even being considered?

As i've stated to many of my colleagues/comrades, just the sight of him makes me cringe in fear Mr. DT needs to get back to what he is really good at... not politics.

Agreed. This is too important to be playing games.

I am in the same hope fantasy as you! Some scary stuff. I suffer from DT as well.

Inexplicable how he's gotten this far.