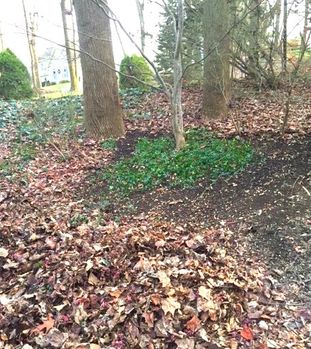 Been trying to build this blog for the last two weeks, but every time I put the pieces together, it wasn’t such an attractive structure.  You’ve seen them, buildings with no visible means of light.  Windowless.  They look like a prison.  Too dark to be considered inhabitable.

Much like the infamous house we’re building, lately, I’ve been feeling like a stalled construction project.  I’m the nail in the knotty part of the wood; no matter how many times the hammer comes down, can’t get to a point of being secure.  Whack, after whack, I’m still precariously waiting for some stability.  A grip.  The hits feel like they’re coming one right after another but nothing’s coming together, instead it just feels like it’s all falling apart.

Have had several titles for this installment of my on-going biography; In Search of Joy, In Search of Relief, Epic Fail, Whack, and finally, The Build.  It’s been a painful process; I’m hoping for suitable shelter soon.

(That unstable foundation was poured last week, but what followed just got ugly, not worth posting.  Fortunately, we’re another week in and things have shifted; what follows is much more sturdy.  Stick with me, this one has been brewing for so long, I think it’s progressed to being potent.)

Have heard it said a lot lately, (and it’s true,) few people have it easy; everyone has difficulty in their lives.  We are no strangers.  I’m questioning though, how long do you wallow before shaking your head at your own stinkin thinkin?  You know, the thoughts that settle on all things negative instead of resting in reason.  (Resting in reason, now there’s an idea.)  Unfortunately, I’ve been putting on a clinic in wallowing lately.  Try my hardest not to inflict it on others, believe I do a serviceable job of hiding my pain, the battle is primarily in my own head.  Not a fun place to be.  So much anxiety, I’ve been stymied as to what to do with it all.

We’ve had a few more blows; they ignited an unhealthy inventory.  An injurious reel of misfortunes over the last few years that kept playing in my head: losing my job, Rory’s suicide, Mom’s death, Ric’s death, moving after twenty years in the same town, living in a sea of boxes for nine months, the house that couldn’t, vandalism, health stolen by a drug reaction, the house that still couldn’t, moving to the basement, Jeter’s death, a depression (beyond my own,) within the Fab Five that took us to the emergency room twice over Thanksgiving week, (most important,) the health my children, and finally, the house that may not.  Like a vortex, I was sucked in.

No matter how many times I rolled out reason, despair muscled its way to the front.  It’s a persistent beast, demanding and insidious.  A purveyor of darkness; brutal in it’s folly.  And the worst part, my problems are child’s play compared to several people I know, feel like my lapse has been an insult to their struggles.  But it is, what it is; baffling at best and beyond me.  And being the product of a dysfunctional family has only fed the beast.  It hungers for hopelessness.

Until yesterday, I thought it was going to eat me out of house and home.  Gluttonously sucking up the light, delighting in the gloom.  But, low and behold, I have windows; a couple hundred people opened them wide.  The 11th was my birthday and, even though I thought I wanted everyone to forget about it, some serious love came my way.  Songs, cards, gifts, phone calls, text messages, an Instagram hug, and Facebook posts galore.  Kindness by the truckload.  The George Bailey effect.  Reminders of what really matters.  People.  Love.  My family and friends made it an absolutely magical day.  It suddenly got much brighter.

Per the climate lately though, the beast came knocking the next day; (insert shaking head) happiness, happiness, what were you thinking.  Found out there would be no house by Christmas.  It was already too late and I knew it, the movers need several weeks notice.  But hearing it was a blow all the same.  Our most recent completion target was Dec. 16th.  (Anyone got a house they would rent to eight nomads over Christmas?  Fitting our entire family in the basement, {one double bed and a college fridg,} isn’t going to work,) I contemplated letting the beast in, but instead I sent him away and raked leaves.  For hours.  Spent some valuable time with my organic metaphor.  Ever see the movie, Being There?  Chauncy Gardener is my hero.  He would understand, this yard is sad and broken.  It’s been sorely neglected for years.  Leaves have overtaken the grass and foliage, burying the beauty and choking the life out of it.  Can’t bear to leave a yard, that could be enchanting, to wither away.  I also love the person who's selling the house and want to help, so I’ve been on a mission to restore it to health before we leave.

It’s therapy.  A way to work off anxiety; with the bonus of being the perfect ambiance for prayer.  I’ve done a lot of both.  For weeks, the combination of the two have kept me on my feet.  But this session was different.  For the first time, yesterday I saw the fruits of my labor.  The leaves have finally stopped falling in this forest fortress and I’ve cleared enough of the beds and grass to see life again.  It’s going to be beautiful.  Hundreds of pounds of composted leaves and dirt have been cleared away and I could finally see the difference.  What was smothered, is breathing and lifted.  The parallel has not escaped me.

When I realized what had been accomplished a new reel, (fresh off the birthday love,) started in my head.  Not showing the film of how broken I am, but how capable.  At that moment, the yard and my life felt like a great test, or maybe a certification.  Complete this daunting task and you can move on to the next level.  Clear out the things that block the Son, and amazing growth will happen.  Concentrate on what’s possible instead of what’s gone.  Roll up your sleeves, it’s time to start building.

I know where I’m going to start.  Shay and I have been cautiously laying groundwork for a new company; the heart of it employs her considerable gifts for marketing and social media.  But my vision includes an expanded reach.  More of an alliance of our dreams.  The artistic skills of my family astound me.  A perfectionist to a fault, I wouldn’t tout their talents unless they were legit.  With Shay at the helm, their combined abilities present the potential of a media powerhouse.  And beyond my own, there are a number of insanely talented people I want to promote.  Especially musicians.  And to be fully forthcoming, where dreams are concerned, I want to include filmmaking too.  That’s mine.  Always has been.  Recently got an unexpected shot in the arm when I heard someone talking about my ability as a director.  After hearing her talk, I can admit it, got some mad skills.  Need to start using them.  There’s a stunning actress I want to introduce in a short film I’ve been dying to make.  A music video; absolutely penetrating song, Heroin, by name.  You can imagine.  Powerful.  I need to find a way to do it.

Yup, time to start building.  The yard is growing.  Depression and heartache are great debilitators.  They rob us of our essence, our ability to dream and create.  I’m claiming it again.   And even if the vision is pie-in-the-sky, it’s possible.  All things are possible to those who believe.  Thoreau knew the deal, “If you have built castles in the air, your work need not be lost; that is where they should be. Now put the foundations under them.”

That’s it, the foundation.  The materials are gathered and they're the best money can buy, time to start the build.

This is a link to a short I made a few years back.  I was curious if I could make a film entirely by myself.  Never again.  There are mistakes that wouldn’t be there if I could’ve stayed behind the camera.  It’s about a dear friend and my interpretation of what bolstered her the day of her husband’s funeral, after his sudden death.  Her heart was dragging beneath her, but somehow she found a way to carry on.  The best part of the film?  The music.  Sean let me cut up a piece he had written for a documentary.  It’s worth sticking with all seven minutes just to hear his work.  It’s inspired.

I’m ready to pour the concrete.

Thanks, Miguel, grateful to be out of the dark. Things will continue to get better, got a message, "The time of misfortune has passed." Talk about a gift. Thx again, always good to hear from you.

You are a courageous woman!! Your honesty and authenticity is breathtaking, even while one hurts with you!!

Sarah shared this with me and I truly appreciate your message and strength! Your words meant so much to me as a build a new foundation for me and the kids. Wishing you a Happy Belated B-day

Thanks, Barb. Hoping the path ahead for you is filled with peace and happiness. All your hard work will bear fruit. Blessings

This was almost painful to read, as I have personally watched you go through it. The beauty you have is your courage to move on and come out on top again. I am so proud of the person that is "you".

You have helped me find that top. I have no greater advocate. Blessed by you beyond compare.

Love covers all, My Sweet. You know that I heart you madly!

Your love is curative <3