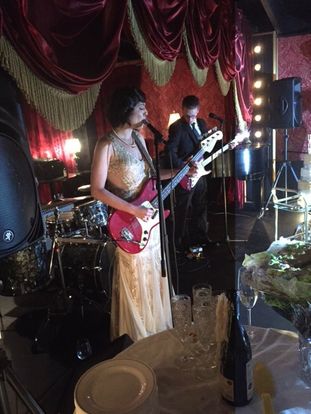 As promised, a little joy.

Actually, joy abounds.  I got a phone call from AK, the clan is one little angel stronger.   A baby coming into the family is monumental.  It just doesn’t get any better than that.  I would love to share the picture she sent of the triumphant trio, but it’s a moment that must be respected.  One of the most touching delivery room pictures I’ve seen, it captured the introduction.  Still on the surgical table, (a cesarean was necessary to help him make his grand entrance,) Mom is aglow with the significance of the person she holds, and Dad hovers above, establishing his Papa Bear shelter.  The smile on his face says it all.  This is their moment.  Their family has expanded to four.  Big brother, (the elder statesman, at two,) was home with grandma, patiently waiting to complete the quartet.  Truly, it doesn’t get any better.  Congratulations Kate and Chris.

Joy is on a roll.  Over the holiday weekend, BK and I drove down to North Carolina to attend a wedding.  My Godson got married.  Well, one of them.  I have three, and one Goddaughter.  (They are four, absolutely stellar human beings.)  But Trent was my first Godchild, and nothing could have kept me from attending his wedding.  His bride, Dani, is an absolutely gorgeous young woman, who positively radiates creativity.

Theirs was the most unconventional, conventional wedding I’ve ever attended.  It was unique from beginning to end.  Their rehearsal dinner was a cookout in the back yard of one of their groomsman.  A down-to-earth affair, with a familial feel.  The event came equipped with a mouthy rooster who was audibly strutting his stuff about a certain haram he presided over.  Meanwhile, the chicken coup was all a flutter over the bride.  (Jealousy might have had something to do with it, she had the coolest guy at the dinner and they were stuck with the flashy fowl who needed a muzzle.  Sorry chick-a-dees, the groom is spoken for.)

Their ceremony was memorable on so many levels.  But before I share the deets, a little background is necessary.  Trent and Dani are rockers.  They're musicians, songwriters and guitarists, and they each have their own bands.  Hence the picture above from their reception.  (They wrote a song together for their special day and tried to play it, but Dani had pretty much lost her voice; luckily, they had a recording of it and that ended up being their first dance.  It was all very cool.)  But I’m getting ahead of myself, back to the ceremony.

To call it just a ceremony imposes limits that eclipse the scope of what these young people created.  Theirs was a wedding of performance art.  All the players were dressed in elegant black attire, except Dani, hers was the sexy but classy, creamy gold gown behind the guitar above.  The dynamic duo that presided over the wedding were listed in the graffiti style, ingenious, playbill program as, “Raddest Officiates Ever.”  On his way in, one of them paraded past the guests, reciting Prince lyrics.  Trent, smiling ear to ear, followed the presiders and calmly slipped into place.  That was the bridal party’s cue, they made their entrance dancing across the rooms, winding through the parlors of the impressive old mansion, two by two.  After they were all in place, (with their bouquets of blooming cotton branches, laced with flowers,) an adorable flower girl, who looked like the real-deal, distributed red rose petals, pulling them straight from the flowers.  Then came the headliner, the star of the show; Dani floated down the grand staircase in the middle of the house and majestically made her way along the same circuitous path.  She wore a lacy-looking black mask over her eyes.  She was, literally, stunning.  And, best of all, she chose to process in to the Ray LaMontagne tune, Hold You In My Arms; that sealed the deal for me, she had my heart.

Now, one of the key elements of performance art is the relationship between the performer and the audience.  For that reason, this show was a success before the band ever took the stage.  This was the proverbial, “stacked house.”  Everyone there loved these two people and were stoked about standing with them as they dedicated their lives to each other.  And dedicate they did.  When the mask was removed, the jokes were told, and the comments concluded, Trent and Dani spoke to each other.  The sentiments of their vows were shared as if no one else was in the room.  They both made us chuckle a bit in the beginning, but when they spoke of the love, admiration and gratitude they each had for the other, it was easy to see their need to be one.  Gratifying to know this young man, who has been in my prayers (after all, that’s what Godmother’s do,) since the day he was born, found his soul mate.  She’s one lucky girl.

The reception kept true to form with live music from both their bands, interspersed throughout the night.  The setting was a chicly decorated speakeasy, peppered with comfortable antique couches and chairs.  Cajun food added even more spice to the mood and numerous speeches about the bride and groom ran the gamut from borderline raunchy comedy to touching and heartfelt regard.  It was truly the most unique wedding I’ve ever attended.  And, of course, the favor on the way out?  A guitar pick that was inscribed on both sides; Dani picks Trent, on one, and, Trent picks Dani, on the other. Brilliant.

Thankfully, joy takes its turn in the progression of our days.  These prodigious and life changing events reminded me of a favorite passage from the Somerset Maugham novel, Of Human Bondage.  Heaven only knows where the book might be, in this sea of boxes we’re residing in these days.  But I was able to find a little journal I used to write notable quotes in, and Mr. Maugham has a page.  Fittingly, I was reading his novel while in the hospital, giving birth to Shay.  (53 hours of labor had to be filled with something.)  And for some odd reason, I brought the little journal with me too, so his page was documented on Shay’s actual birthday.  When I came to the line, it struck me as a thought that should be pondered.  (Especially considering what BK and I were embarking on that day.)  It was in reference to the troubled main character, Philip Carey, coming full circle in his life, realizing that the most coveted course for human existence was also the simplest.  The quote I copied in the journal the day my beautiful daughter came into the world was salient, “…had he not seen also that the simplest pattern, that in which a man was born, worked, married, had children, and died, was likewise the most perfect?”

I've seen.  And new babies and brides bring it into even brighter focus.  Yes.  Perfect.

For anyone who enjoys short stories, I've posted a new one today in the Short Stories tab.

What a special and a wonderful occasion. I loved hearing about it and your writing just let me feel as if I was there.

Such beauty! Thank you for giving me a window into this special day of love! Trent couldn't have asked for a better godmother :)

Thank you for such beautiful, kind words. I honestly believe my little girl gained a wonderful family of in-laws! It was certainly a beautiful and memorable day.

Thank you for your beautiful tribute! You are the best God-mother on earth! Love you to pieces! We were honored to have you and Kevin there celebrating with us!