The F Word ~ My Sustenance 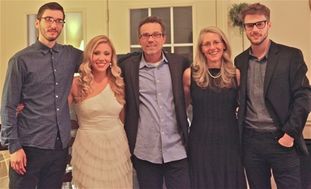 The trouble with blogging is the topics ~ there are too many of them.  I have a folder on my desktop that contains random thoughts I’ve been gathering as fodder for my weekly buffet of feelings.   It constitutes quite a spread, from facades, to fears, to friendships, it’s all in there.   But the “F” word that’s been on my mind these days is the one that means the most, family.

The Fab Five is an interesting bunch.  We are made up of writers, filmmakers, a composer and a visionary of all those things wrapped into one.  Our family now extends to our endearing son-in-law and two beautiful young women, who fit perfectly into the fold, they round us out just nicely to the Exceptional Eight.  We are a family that has strong ties and we make an effort to stay connected.  Being spread between Miami, California, Pennsylvania, and New York City doesn’t always make that easy but, if we’ve learned nothing else this past year, it’s necessary.  Maya Angelou said it best, “I sustain myself with the love of my family.”  She had it pegged.

Life wasn’t always so fab though, we had some pretty cavernous drops in the ups and downs department.  BK, (the love of my life,) and I had both come from dysfunctional families, (alcoholism, in one way or another, had branded us,) and the first nine years of our marriage played out as a rather inauspicious start.  By the time our two oldest children came along, alcoholism ruled our roost and we were headed for the biggest drop of our lives, literally.

BK had struggled through unsuccessful attempts at sobriety during the year I was pregnant with our second child.  After two seven-day, hospital detox programs, (the limit of our insurance for such things,) he had lost the battle and was quietly drinking his way through our days.  He had already lost his job and we were quickly burning through the severance they gave him to assuage the guilt of firing a man with a toddler and a pregnant wife.  Not the best of times.

The day we brought our son, Sean, home from the hospital is a day I will never forget.  It was the turning point for our family, the darkest of nights, before the dawn.  With a new baby in the house, schedules had gone out the window and it was eleven o’clock before we got Shay, our 18 month old daughter, in bed and asleep for the night.  Sean was unusually active and alert for a newborn and it wasn’t looking like he was going to sleep any time soon.  My mom had come for a couple weeks to help us, and she and BK said they would take it from there; they sent me upstairs to get some rest.  They were hanging out in the basement of our little bungalow, a makeshift playroom with a couch and a TV.  A few minutes after I stretched out on our bed I heard a sickening thud.  It was loud and deadening and it brought me to my feet and down the stairs in an instant.  The scene was surreal, I barely heard my mother’s scream, it felt like I was moving through a nightmare.  The baby was on the concrete floor with his face bright red and his arms extended to the sides like he was grasping for the breath he couldn’t find.  I scooped him up and the movement broke his frozen asphyxiation, he took a catch breath and started to wail.  His head immediately started to swell.  The horrible realization was easy to recreate, BK was pacing the floors with him and Sean had lurched back out of his arms and crashed, head-first, to the floor.

We headed to the emergency room with our three-day-old baby.  There was no car seat employed, I wasn’t letting him out of my arms.  Desperation is an energy, it grips you like a vice and fight or flight takes hold.  A merciful voice in my head told me this fight needed to be of a different kind.  Drinking was certainly a factor in the events, but no harsh words could pass between us; the stakes were too high, anger would only make it worse, (as it always does.)  I didn’t talk, instead, a prayer came into my mind and I repeated it over and over.  I must have said it five hundred times throughout the night, “Trust in the Lord, for He is good.  His love and mercy endure forever.”  I repeated those words with the concentration and force of a prizefighter.  I said them with all the hope I could muster.  I said them as a lifeline, for all of us.

It was an endless night of tests and x-rays and CAT scans.  They took him from us immediately after we got there, around midnight, and we didn’t see him again until daylight.  The doctor placed Sean back in my arms in the morning and asked me to try and feed him.  He said the tests showed nothing below the surface.  That he had a huge goose egg, but no damage to or below the skull.  He said it was nothing short of a miracle.

Gratitude took on a new meaning for me that night.

They say alcoholics have to hit bottom before they can find their way up.  Alcoholism is a family disease and together we had all crashed to the floor.  The next month, through the love and assistance of family who had endured that same kind of bottom, (our beloved aunt and uncle who are more like our parents,) BK was admitted to a thirty-day rehab, Father Martin's Ashley.  That was 25 years ago this past September and our lives together as a family started that day.

There have been some tough times along the way, lots of ups and downs; but for me, gratitude has changed everything.  My list is long and fortifying.  Some of the big-ticket items; lasting sobriety, the man of my dreams, children that make us more proud than there are words to adequately express, answered prayers on dark nights, and the love of my fabulous family.   Maya Angelou was right, it’s the thing that sustains me.

Your honesty & bravery, and your family's success are an inspiration.

I takes courage to look at troubles in the past & still be full of hope & joy You are a special lady, Sooz

Thank you for sharing, lifting the veil of secrecy on family and alcohol issues raises us all up. Lighting the way for healthier stuff!

How brave you were to share this blog. Here's to hoping that you may have changed someone's life with your words.

Thanks for sharing! Family is everything!

Sooze, well said. Thanks for sharing your story and hopefully inspiring others to believe in what the Lord has i store for those who believe. I am blessed to have had you as a friend. Love you!!!

Trust in the Lord with all your heart, and lean not on your own understanding. Proverbs 3:5

Breaks me up every time too. For a long time I kept the hospital receipt from the night inside my AA Big Book. Reminded me of forgiveness and second chances. Blog did too. G*d bless ya and Chief too.

*its head.... Great entry, Sooze. Thanks for sharing the secrets behind success of the Fab 5!

WOW. This explains so much. No wonder Sean's a drummer. To take back that night, and empower himself by reversing the trauma of a thud on it's head. Now HE is the thudder, pounding magic :)

Susan, your words are powerful, loving, and in-a-way refreshingly familiar. Gratitude is contagious and I am grateful to know you; may your writings (and feelings) touch everyone that you encounter.

This story makes me tear up, no matter how many times I hear it. God is good.