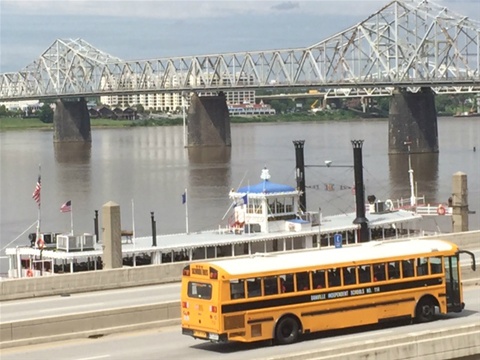 This is a first.  My MO for blogging includes writing during the week, building in at least one day for editing, then a final touchup on Sunday before I post.  I’m particular about what goes out.  Today, I’m winging it.  It’s not that I didn’t want to write this past week, I couldn’t.  (We’ll get to that.)  I spent the week in Louisville, KY with a group of students from the school where I taught.  They were competing in a national competition for an organization called, Skills USA.

Skills USA is, in the words of their conference brochure, “…an unstoppable nationwide network of students and instructors who share a common bond with industry.”  They complete that by identifying themselves as, “civically engaged members of American society involved in community service.”  Their instruction comes through career & technology centers.  The tagline for the organization, Champions at Work.

These are high school students who have identified a passion and realized the value of honing in early.  They’ve placed themselves in a situation of extensive training, in one concentration, while they’re still in their teens.  Their focus and dedication, at such a young age, on what their projected life-long jobs will be is commendable.

In the annals of seeking out meaningful employment as a teen, my humble beginnings were predictable high school fare.  My first foray into a W2 involved a swimsuit and flip flops, some real heady stuff.  The hour of rotation in the snack shack several times a day was responsible for my freshman 15 while college was still a distant dream.  For the sake of my backside, I gratefully graduated to a real job, retail.  Although I was a reliable employee, I had no burning desire to become an expert at anything, nor was I giving any thought to being civically minded.  To me, working in high school was strictly money in my pocket, I wasn’t thinking about future careers.

Young people today are a different breed.  At least the people I just spent the past week with are.  If anyone out there has a negative opinion of teenagers, one hour with these kids, (let alone an entire week,) would alter that opinion.  When I first started the blog, (on the twelve-hour bus trip home yesterday,) I wrote about the competition and the diversity of both population and concentrations that made up an amazingly intense week of high-level competition.  But then I said my goodbyes in the parking lot, (at 10:00 at night,) and embraces changed all that.  On the two-hour drive home to Shroomville, I thought about the thing that left the biggest impact from the week, the kids.  Their personalities, their talents, their exuberant youth.   I’ve enjoyed knowing them through school but this week fostered an unexpected bond.

There was the shy girl who was really sick and falling apart in my room the night before her competition.  The coaching session ended up not being about the prepared words, it was about reminding her of her worth; the passion and talent that brought her there.  She listened, she won first place in the nation for her t-shirt design and presentation the next day.  Then there was the talented graphic artist who designed the pin for Maryland, (each state had one; bartering for them was standard fair.  There were some slick negotiators who had one from ever state pinned to their lanyards.)  He got sixth in the nation for a pin that was in the greatest demand, (it has a jouster that rides across the bottom.  Magical.)  We all played board games until the wee hours and his was the laugh that was most coveted.  The last group of our public speakers, on the print production side, was a trifecta of females who own my heart.  They are the team that designed and created a promotional bulletin board for their contest.  It’s a fantastic piece of work, a real departure from the designs that have gone before them.  They won second place in the nation.  (I should put this in perspective; there were over 30,000 people there.  This is the Academy Awards of career achievements.)  I’ve never seen a team that worked more cohesively.  They earned their win.  Such talents.  And, more importantly, such amazingly beautiful spirits.   I adore them, flat out, I simply adore them.

In addition to coaching the prepared speeches, I was officially attached to the Television Commercial duo.  Two students I’ve written about before.  Talk about humble beginnings, they each came to production through their completer course; their ticket out of high school.  As a fantastic fluke, they discovered their passions and emerged as genuine talents.  I love these boys like my own.  They’ve each had some stranger than fiction beginnings that are entirely too personal to recount, but suffice it to say, they’ve come through the depths of some serious hardship and pulled themselves up.  Way up.  Unfortunately, because their computer crashed during their timed editing session, they turned in a product that was rushed and incomplete, so they didn’t place in the top ten.  But, take away that roadblock, I have no doubt they would have been strong contenders for a medal.  I told them, their triumphs are still to come.  They’re already champions, they won gold in the state of Maryland over all the students who went to school for production.  They are right where they belong.

That’s the perfect segue to my final group.   This is a duo of filmmakers that are a cut above.  A young man and young woman with personalities that are driven to create every day.  During the school year, when other students were done with their work and relaxing in the lull between projects, these two were making films as personal projects.  They didn’t know for spare time.  Spare time what?  They’re, undoubtedly, doing what they were put on this earth to do.  And doing it so very well.

Theirs was a grueling competition that gave them approximately 40 hours, after being given a prompt, to write, shoot and edit a five minute film.  The prompt was, Unbridled Spirit.  They went right to work and were ready to start shooting around 6:00 p.m. on Tuesday.  Because I have a degree in acting, I had told them before we left that I would be available for any characters they needed to fill, thinking they might throw me in as a small role.  They took me for my word.  There are only two people in the film, myself and one of the filmmakers.  They forced me to dust off some old and pretty rusty skills and we hit the ground running.

After twelve straight hours of shooting, I made my way back to my room.  The plan for them was to get some sleep and pick up where they left off a few hours later.  I don’t think sleep entered into the picture.  Their sole focus was on finishing their film by eight o’clock Thursday morning and sleep would have gotten in the way.  I will hold you in suspense no longer, they were awarded a bronze medal as the third best filmmakers in the nation.  Their advisor and I agreed, they were on par with the other two and the final distribution of first, second and third could have been shuffled in any order.  They are one of the best, in a field populated by the nation’s best.   It was a privilege to work for them.  I’ve said it before and it’s even more defined now, I look forward to following their careers.

(If you're interested in watching their five minute film, here's the link)

So, you can imagine, writing wasn’t an option.  I was otherwise employed.  Between coaching, ironing, (I pressed their shirts for each day of the competition, I knew looking crisp would help them be crisp,) acting, and some all-important marathon board games, blogging didn’t make it on the schedule.  I averaged two to three hours of sleep a night, with one all-nighter thrown in there.  It was an exhausting but inspiring week.  And I wouldn’t trade it for the world.

Kudos to not only the skilled competitors, but also to the teachers who’ve recognized and nurtured those ambitions.  Without them, things like Skills USA wouldn’t even be possible.  They instill a fidelity to work that makes these kids proud to contribute.  When was the last time you thought of your job as something that would win you an award?  It's obviously not a bad way to think because they all kicked butt, all week long.  Whether they were cutting someone's hair, or designing robotics, or baking, or making movies, they dedicated themselves with a fervor that was admirable.  They realized the value of the contribution they were making and they took pride in every stroke, whether it came from a hammer or a nail polish brush.  At the closing awards ceremony, 30,000 students were singing along with Queen’s, We Are the Champions, and feeling the weight of the words.  Their victory is sweet; and, hopefully, contagious.

So impressed by these kids!! Your acting was great, too!!

Thanks Jeffee, your strong connection with such things makes your praise really meaningful.

Those kids were blessed to have you on their side. Congrats to each and every one of them for their hard work and determination!!

Thanks, Nan, you are the best.

You are all winners!

Thanks, Patty, you're a gem.