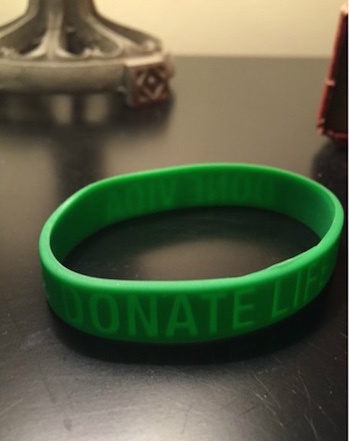 Okay, so the apology is coming upfront.  I usually use the opening graph to maneuver through some odd little comments that somehow have a peculiar connection to my main topic.  None of that today.  I’m just apologizing from the get-go.  This is another heavy post.   I promise to ease up after this one.  It’s just that, as a writer, when you see an eighteen-year-old laid out in a casket, it’s pretty hard to ignore.  Especially when the loss is so heartbreakingly unnecessary.

On Mother’s Day a young man from the school where I teach was in a car accident.  He was hit by a drunk driver.  From what I understand, his grandparents were in the front seat and he was in the back when their car was rear-ended.  His grandparents weren’t hurt badly, but he was tossed so violently that he sustained a profound brain injury.  He was on life support for four days when the decision was made to unplug the machines.

Now the reason I share this penetratingly sad story is because of the outcome.  I live by the idiom, all things happen for a reason.  There has to be a purpose, otherwise it would be too debilitating, too crushing to keep going.  But under those circumstances, it’s hard to find an up side to such a senseless loss.  I have tremendous respect for his Mother, because she created one. This amazingly considerate woman, the guardian angel of this well over six-foot basketball star, a boy who was in peak physical condition, (and a polite and considerate young man as well, he stood out for those qualities,) donated all of his available organs.  There was a list next to his casket of all the people he saved.  It was seven or eight long, I lost count reading.  There was also a note that his corneas were going to give sight to someone as well.  It was incredibly moving.  There was this beautiful child, laid out with a teddy bear, his high school diploma, and personal mementos lining his casket; a scene that was almost unbearable to witness.   And directly next to him, as you moved past, was the list, beautifully framed.  It changed everything.  He and his family were heroes of unimaginable proportion.

The indelible image of that lifeless boy resurrected another such picture for me.  An image I’ve held in my mind for over twenty years.  A distant memory, but still crystal clear.   Recounting this story reveals an intensely personal moment that might make some think I’m a nut, but it happened all the same. It was a tragic loss that had a profound purpose in my life.

Our family was leaving a work picnic that took place at a park tucked back in a picturesque country setting.  We were in two separate cars because we were helping our neighbor get a second vehicle home.  I was in the car with Kevy, who was only six months old and BK had Shay and Sean with him.  As we were headed down a long straight road, lined by endless farm fields and an occasional house, I happened on a boy stopped in the middle of the road; he was perched on his bicycle, crying.  Kevin hadn’t seen him, or at least seen what condition he was in, if he had, he would’ve stopped too.  I slowed down to see if I could help him and realized why he was in that state.  Off the side of the road from where he stood, was another boy, heaped in the tall grass, motionless.  The pieces quickly fell into place and I realized there had been a terrible accident.  I got out of the car and helped the boy off his bike, he was shaking too much to ride, and told him to go and tell his friend’s family.   Down the road, there was a truck facing the wrong way and I yelled for the stunned driver to go to the nearest house to call 911.  When I finally made my way to the crumpled body, there was little to be done.  He was mortally injured and no amount of CPR training was going to revive this helpless boy.  From the distorted posture of his battered frame, it was obvious his back was broken in several places.  Although he was still breathing, his facial features were disappearing in the growing sphere of his damaged brain tissue.   The impact was so severe, the soft tissue of his mouth and nose were swelling beyond their boundaries.  He regurgitated and his body responded in waves of disconnected wreckage.  To his right, one half of his bicycle testified to the fatal events.  The second half was nowhere to be seen.  I did the only thing I could do to help, I got on my knees next to him and started to pray.  I had no medicine, but I could ask for mercy.

That’s when it happened.

On my knees, hands raised, I asked for God’s help.  But my pleas were stopped cold when an oval shaped field came into view over the child’s body.  Within the confines of the space, the atmosphere was dense and danced with the intensity of the air directly above a flame.  Once the vision appeared, I was locked to the gaze and couldn’t have looked away if I tried.  Slowly, the oval dropped directly above the boy and a small piece of the same kind of energy leap from his body into the space.  It slowly rose back to the original position, settled for a second, and was gone.  I was mesmerized, but my trance was broken by a preteen boy who road up to the scene and picked up the remnants of the bike to inspect the damage.  He threw it into the field, as if tossing it out of sight might make the horror go away, then he escaped on his bike without a word.  A man hurried to the scene and was stopped in his tracks at the stark realization and awful truth.   He started violently punching the air, repeating, “Aw J.J, no, aw, no, J.J.”  For a moment I thought he was going to hit me, but then he leaned over him and J.J.’s eyes seemed to flicker in his direction.  I told him it was the only movement he’d made and maybe it was a good sign, that he recognized him.   He ran off in the same direction the devastated friend on the bike had headed.  I later found out the man was J.J.’s uncle.

Kevin came driving back, after he realized some distance down the road he had lost me.  He walked up to me and the first thing he said was, “Do you know his name?”  Oddly, I did know his name, I had just found out moments before.  This lifeless boy wasn’t just somebody, he was J.J.  I told him and Kevin said, “Hang in there J.J.”  Then he went and waited in the car with the kids.  An EMT unit finally arrived and I immediately got out of their way and we all headed home.  As horrifying as the scene was, I felt like I was in a state of grace.  It’s a hard feeling to describe, I will not do it justice.  Even with the baby whaling in the car seat, (while I was away from the car, he had worked himself into a frenzy,) I was calm.  My chest felt like it was connected to a harness that was pulling me up and out of myself.  That feeling stayed with me until I got home and BK and I came together in the driveway.  As I melted into his embrace, I was back in reality; the transcendent feeling disappeared and I dissolved into heaving sobs.  I wanted it back, I wanted to believe the vision over J.J. was a healing sign, that it appeared to help resurrect an innocent child from a fatal fall bike ride.   I didn’t want to believe his spirit was leaving for good, releasing itself from his parents, his friends, his family.  But the hard truth of the aftermath became clear the next day when the newspaper arrived.  That was twenty-three years ago, and I still have that paper to this day.  On the front page was a picture of a handsome, twelve-year-old boy who had died on a country road.

J.J. wrote my name on his list, he gave me a priceless gift.  A truth passed from one human being to another.  The essence.  I saw it.  It was the realization of life beyond our perishable containers.  The purest parts of ourselves; our souls, or spirits, or whatever you want to call it, it’s there; it’s the core of who we are.   And it thrives.  No matter what, it thrives.

BK wrote a poem that day, it’s one of my favorites.

(Seeing my wife bending over a dying boy)

I had not noticed the sky

until I saw you against it,

incongruous in your orange shirt

against the soft white-blue

On your knees, framed in broken

grass you looked away into cloud wisps,

brush strokes against a distant canvas,

to a vastness that frightened me.

The boy before you was broken.

had crushed his insides out.

They lay on his shirt

It rushed on past a late afternoon

sun into dusk. I noticed

it went on forever.

This was not just a teary-eyed read. . . I was sobbing before the end. It was nothing short of profound.