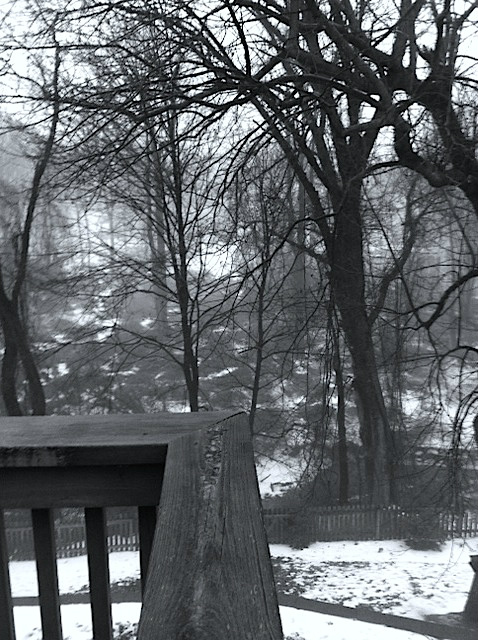 This year, Richard III has obviously invited us to join in his, “...winter of our discontent.” The weather this winter rivals the weight of a Shakespearian tragedy.  Will's got nothing on Mother Nature.  I would venture a guess that living in the east, especially up east, is where it hurts the most.  But lately the national weather map, in it’s entirety, has looked like an ugly and extensive bruise.  Maybe everyone is hurting.

Was it Kurt Vonnegut that said nature responds to pain?  Whoever it was, I think they were spot on.  I feel like this winter has been the appropriate response to the past year and change for our family.  Our family, the group my husband, (in his blog, Nation of One,) lovingly refers to as, The Fab Five, is comprised of he and I and our three children.  I don’t think he’ll mind that I steal the moniker.

The past year for the Fab Five has been challenging.  Within a five-month period we lost three people.  The first was a young adult of 25, who had come to live with us four years ago, after his dad died of cancer.  He was as close to being our child as a person could get without sharing the same blood.  He was also a best friend and eventual roommate to our oldest son.  His was suicide.  That devastation came the week before Christmas.  Then, a month to the day later, my Mom got sick and was hospitalized for an emergency surgery.  Two weeks after the successful surgery, she died of pneumonia.  Three months after that, on Mother’s Day, I got the news that a life-long best bud, a man I adored, (one of the funniest and sharpest people I knew and a person my family knew and loved,) passed away of a heart attack, sitting in his favorite chair.  Wow.  That was a trifecta that got my emotional attention.

It’s been a long, cold stretch.

Grief is an illusive thing.  When a substantial chunk of time has past and you think you’ve finally scaled the last wall, like a frustrating video game, another level appears out of nowhere; and you just want to sit down and worry about tackling the climb later.  Sometimes, it takes too much effort to look for daylight.

The weather knows.  It feels that need to be dark and cold and barren.  I remember some years ago, another dear friend, from my college days, called with the horrible news that her husband had died of a heart attack while he was stopped at a traffic light.  He was way too young and ridiculously talented, a riveting opera voice that had graced the Munich stage.  A good man and a great dad, it just didn’t seem possible.  I flew down to Raleigh, NC the next day and the weather had definitely responded.  In a place that rarely saw severe winter weather, an ice storm had gripped the south and the broken limbs and downed trees looked like a war zone of shattered hearts.

So, I suppose it’s no wonder the endless frigid temperatures, the back-breaking accumulation of snow, and the paralyzing ice events have seemed right in line with some broken hearts I know.  Winter has commiserated.  But, let’s be honest, enough with the sympathy already.  I’m ready for it all to go away.  Tripping through life, numb from the cold, gets old, both physically and metaphorically.  So you can imagine my relief when I recently heard a voice that told me the brutal cold, that crystal colossus that has boldly stood it’s ground for too long this past year, is going down.

Some clarification, (I am notorious for it,) to complicate our tender heart issues, my husband and I have recently been relocated by his company, from a place we’ve called home for over twenty years, to a town that literally stinks.  Our new home is in an area of Pennsylvania that has the dubious distinction of being the mushroom capitol of the United States.  Clearly, the town is guilty of olfactory assault.  When I walk our portly beagle, I have to hold my hand over my nose.  The best part of being here is getting to leave once a week, for two days, to go back to my old town.   I’m finishing out a part-time teaching contract for the school system.  I drive two hours on Thursdays to teach, then stay at a different house each week, (don’t want to wear out my welcome with anyone.  I have a long list of kind people who have offered to harbor a nomad.  That’s another blog entirely.)  Then, I teach again on Fridays and drive two hours back to mushroomville.  The voice came as I was driving home this past week.  It was one of those moments that bolster your heart and open a staircase in the wall.  I was driving along listening to music, (the panacea for just about everything,) and a song came on that split the sky.

I usually sing along with music while I drive.  But this one came on and grabbed me by the throat; by the first two lines into it, I caught my breath and started to cry.  The warmth is coming.  Were we broken for a while, oh my yes.  And it’s certainly understandable.  But there’s too much love not to stand up and keep climbing.  The lives we’ve loved and lost will always be with us, it’s not cliché, just true.  And the relocation is a good thing, it’s pushing us to move forward, in the direction of our dreams.

I heard it loud and clear, the crack in the sky is getting bigger and the light is paused to pour in, winter will soon be over.

Thanks for great words and feelings. So easy to relate to.

Sending a piece of my heart your way to crack the ice. I love you more than words can say.

Oh my Sooze. No one can capture a heart as YOU can with your beautiful and expressive writing. I felt as if I was having to take, all over again, the road you had to travel. You are amazing.

My beloved Stark. This is so beautifully written. I'm looking forward to the continuation of your blog. I will never forget how you flew to my side in the storm when Tony died.

This is lovely. I will share it with Frank. I KNOW that mushroom capital! Bought some! Today the sun is shining on the fresh snow. There is life under it ready to bloom soon.

I know of a house in Gettysburg with a couple of empty nest rooms if you're in the neighborhood! I think of you & Kevin daily in some way or other. More tomorrow's more next years!

Our home is available for you when you come home!!

Amazing ... you manage to tap into universal truths & inspire those who read your writings. I laughed, I cried (not in that order) & it IS a part of me, of all of us. PS - put me on the nomad list!!